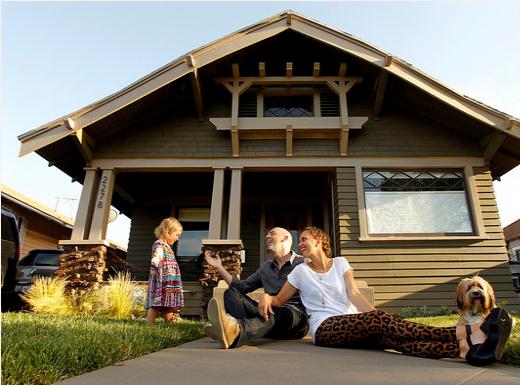 Priced out of much of Los Angeles, young professionals are zeroing on several neighborhoods around USC and to the west, as the expanding Expo light rail line delivers new residents to the area.

Communities such as Jefferson Park, Leimert Park and West Adams are attracting buyers — and investors — seeking their relative affordability, location between the Westside and downtown Los Angeles, and the rail link between the two.

The influx comes as the once-struggling communities now see potential for new investment along major boulevards of South Los Angeles such as West Adams, Jefferson and Crenshaw. Prices are shooting up: In the ZIP Codes covering these neighborhoods, the median home price jumped 40.6%, to $450,000, in the first quarter compared with a year earlier, according to San Diego research firm DataQuick.

“There is great potential on a variety of streets,” said Los Angeles City Councilman Bernard Parks, whose district includes neighborhoods west and south of USC. “People are finding what fits their pocket book.”

Many of the newcomers once lived in the neighborhoods, or their families did, but moved away, Parks said. “Many of them have ties here … and decided to reconnect.”

Real estate professionals are taking notice. Agent Dino Buiatti is opening a West Adams office in June and plans to staff it with 30 agents.

“In the next five, 10, 15 years, the whole neighborhood is going to change,” he said. “There is a lot of money being poured in.”

A key indicator of residential activity is the amount of house-flipping taking place — investors buying, renovating and reselling properties.

Of all home sales in these neighborhoods during the first three months of this year, 11.5% were flips, according to research firm DataQuick.

“There is an awful lot of activity,” said Timothy Braseth, who last year rehabbed 15 homes in the area. “It’s gotten very competitive.”

Developers are scooping up older Craftsman and Spanish-style homes, fixing them up and selling to new arrivals from the Westside, downtown and West Hollywood.

Jillian Dillon bought a Jefferson Park remodel from Braseth last year. The fashion stylist and her music-industry husband came from Venice, where they rented. The couple scooped up a 1908 Craftsman bungalow for $442,000. It’s a mile from an Expo light rail stop, which Dillon predicts will boost their property value in years to come.

“Our home in Venice would easily be a $1.5-million home,” the 33-year-old mother said, recalling bidding wars they endured before realizing the Westside was out of reach.

Racial covenants kept the area predominantly white for decades. But in 1948, the U.S. Supreme Court ruled those racial deed restrictions unenforceable. Middle- and upper-class African Americans moved in, while many white residents left.

In the 1970s, jobs moved elsewhere and crime increased. The relatively new 10 Freeway now segregated South L.A. from the rest of the city, even splitting West Adams in two.

After a more recent wave of Latino immigration, only Leimert Park remains majority African American. Many new arrivals are white. The neighborhoods — largely west of USC and south of the 10 Freeway — are distinct.

Farther west, off Crenshaw, Leimert Park Village was a lively hub of African American arts and culture, but less so now.